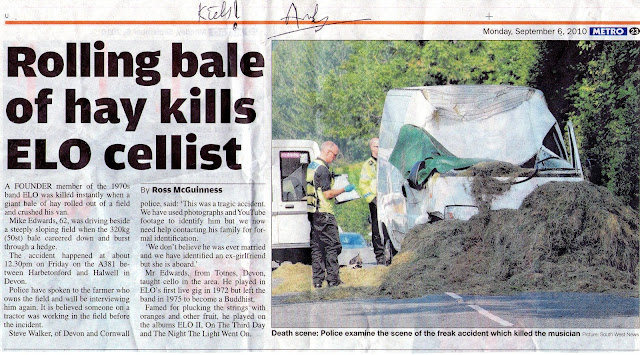 #311: Hello ... Hello ... my old friends ... It's great to see you once again! Earlier this week. it was reported in The Independent as well as several other national and local newspapers that there have been yet further developments in the criminal prosecution relating to the tragic death of former ELO cellist Mike Edwards back in September 2010. Yours Truly KJS and ELO Beatles Forever (ELOBF) have been keeping a close eye on proceedings thus:

The "Big Wheels" of Justice are indeed slow. Here is the text of that report in The Independent from Tuesday 14th February as well as a link for you to peruse it directly thus:

"Two men are to stand trial after a founder member of the 1970's rock group Electric Light Orchestra was killed by a giant rolling hay bale. Michael Edwards, 62, the band's former cellist, was killed by a 400kg bale of silage which rolled on to his moving van from a field as he drove along a rural road in Devon. Edwards, who played with the Birmingham band between 1972 and 1975, died instantly from massive head injuries in the accident near Totnes, in September 2010, despite the efforts of a local GP. Brian Burden, 47, a farmer, and Russell Williams, 23, a contractor, appeared at Plymouth Crown Court yesterday. The men, who are both from south Devon, denied two charges under the Health and Safety at Work Act, of failing to ensure the safety of people at the scene and of failing to carry out a risk assessment. Mr. Burden owned the field from which the bale rolled and Mr. Williams was the contractor doing the baling work. Judge Francis Gilbert released them both on unconditional bail ahead of a trial on a date yet to be set."
Source: www.independent.co.uk/news/uk/crime/elo-haybale-death-6896554.html