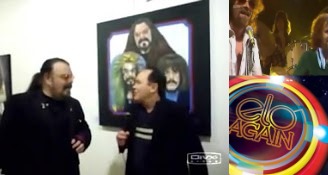 #304: Hello ... Hello ... my old friends ... It's great to see you once again! There seems to be a lot of activity going on out there in the ELO Beatles Forever (ELOBF) (and related artistes) universe:


How The Brits Rocked America ft. Jeff Lynne & Bev Bevan
Here in the UK, the BBC are currently broadcasting an excellent three part documentary series entitled "How The Brits Rocked America: Go West" with these episodes: "How The West Was Won"; "Stairway To Heaven" and "We're The Kids In America". The second of those programmes was broadcast last Friday (3rd February) and featured short interviews with Bev Bevan recalling trans-American touring with The Move and the ELO spaceship as well as Jeff Lynne recalling his initial experiences of LA (and that spaceship!) thus:

Debra Dee's Roy Wood Exhibition
Regular visitors to ELOBF will be aware of Debra Dee's Exhibition Of Roy Wood Portraits which runs at St. Pauls Gallery in Birmingham up until 23rd February. Fellow attendee Martin Kinch - who is Chief Medical Officer over at Cherry Blossom Clinic - has just just published this montage of footage from this wonderful event thus:

News has reached Yours Truly KJS regarding another ELO tribute act who are called ELO Again and appear to be based in South Wales. ELOBF continues to support ELO tribute bands whose ethos is to perform, interpret and keep the ELO sound alive and live! So, whilst we await details of gigs at the time of writing, here's what the band are saying about themselves on their official website thus:

"This group of talented musicians have performed on many TV spectaculars including "Top of the Pops" and have toured extensively around the globe in productions that have seen them perform to sell-out audiences in New York, Nashville, South Africa, Hong Kong, Japan, Singapore, Thailand, Dubai, Egypt, Morocco, France, Spain, Portugal, Malta, Switzerland, Germany, Scandinavia, Latvia and Russia. They have performed over 1,200 shows to date including theatre venues in the UK plus TV and radio appearances."

2012 promises to be an interesting and fruitful year here at ELO Beatles Forever (ELOBF). There are an array of exciting gigs to look forward including Hooked On Classics - Live plus the belated 2CD release of "The Move - Live at The Fillmore - 1969", the forthcoming 180g vinyl re-releases of "A New World Record" and "Out Of The Blue" by Music On Vinyl, EMI's 40th anniversary LP/2CD edition of ELO's debut album "The Electric Light Orchestra" ... and not a few others!