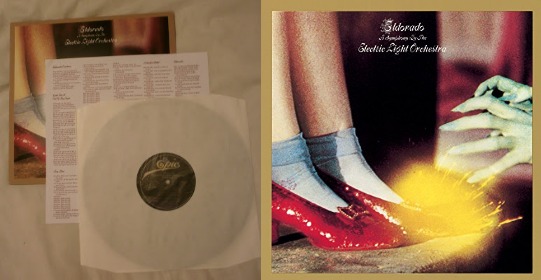 #293: Hello ... Hello ... my old friends ... It's great to see you once again! As we place our footprint in another new year, the wheels are starting to slowly turn again in the ELO universe as we look forward to the many releases and gigs that are now coming into view. One of those releases is the impending re-release on 180 gram audiophile vinyl of that classic 1974 ELO album "Eldorado" in all its glory via Music On Vinyl.

"Eldorado" is one of two superlative concept albums released by ELO, the other being "Time" back in 1981 - both being two of my favourite ELO albums. Originally released on Warner Bros. (K56090) and later reissued via Jet/UA (UAG30092) and then Jet/CBS (JETLP203) whilst also being included in the 1978 boxed set "Three Light Years" (JETBX1) - it is most welcome to see the original album reproduced and re-released here in Yours Truly 2012 although we're not sure if it's from the original tapes or a later digital source. Here's what amazon.co.uk are saying this about the release:

"To pick up where "I Am The Walrus" left off ... that was the goal when the Electric Light Orchestra formed in the early seventies. They wanted to steep different music styles in a rock tradition and mix in some Beatlesque pop, but it took Jeff Lynne and company until their fourth album "Eldorado" to get on the right track. Their most ambitious album to date, they decided to hire a 30-piece orchestra and choir to fill out their sound, and the investment paid off. With the unforgettable "Can't Get It Out Of My Head" as the lead single, "Eldorado" was a commercial, as well as a critical success, and it would achieve gold status in the US. 'The English guys with the big fiddles' had arrived."

The LP (c/w lyric insert) is available for pre-order via amazon.co.uk with a release date of Monday 30th January. This is a worthwhile purchase for the record (and CD) buying ELO connoisseur - even if you don't currently possess a turntable!
Until next "Time" in the ELO (and related) Universe ... KJS ... 15-Jan-2012
Posted by Keith J Sinclair at 18:13