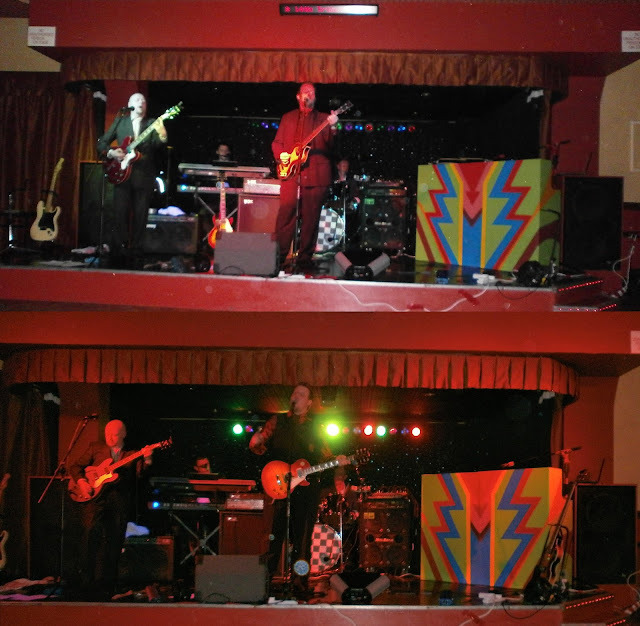 #299: Hello ... Hello ... my old friends ... It's great to see you once again! Yours Truly KJS knew as soon I arrived at The Kingfisher in Kingswinford yesterday (Friday 27th January) on a dark and cold night and was greeted by Hayley Parsons decked out in her resplendent dress that this latest gig by Band On The Runn was going to be another glowing success - and indeed it was!

I drove the ten miles or so to this Band On The Runn performance with Christian '(July 2nd 1644)' Evans and Geoff Cook and we were not disappointed with yet another inspired and professional performance by this great Midlands based act who feature Craig Whale, Ian Hammond, Adam Willetts and Dave Cottle - and who accurately reproduce live the whole musical career of Paul McCartney with a specific focus on his time with Wings.
There was so much more to the Band On The Runn set list than I can put in writing! Without a doubt, every time that I see this band they improve folks. Superb drum work, keyboard wizardry, great guitar craft together with booming bass and driving vocals. Their performance of their namesake song "Band On The Run" and their cover of "The Long And Winding Road" were sublime.
ELO Beatles Forever (ELOBF) recommends Band On The Runn to those enlightened folks who enjoy the music of ELO/Jeff Lynne, Roy Wood, The Move, The Beatles, 'Brum Beat' and related artistes.
Until next "Time" in the ELO (and related) Universe ... KJS ... 28-Jan-2012
Posted by Keith J Sinclair at 13:24