Recommended: The Move: Live At The Fillmore 1969 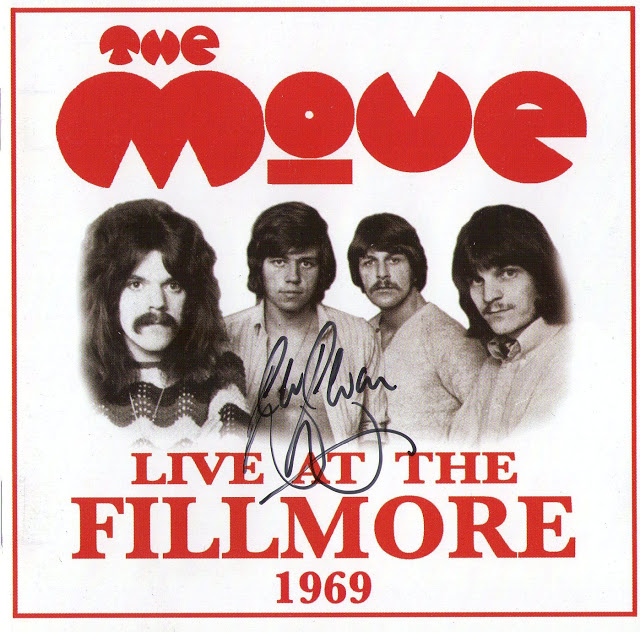 #285: Hello ... Hello ... my old friends ... It's great to see you once again! Here is news of an exciting new release for fans of the predecessors of ELO: The Move. Although only just released as a MP3 download this week on Monday 19th December, the whole of their legendary set at The Fillmore West, San Francisco in October 1969 appears to now be set for release in 2CD format next year on Monday 5th March according to amazon.co.uk (three weeks later than the originally stated date of Monday 13th February).

"The Move: Live At The Fillmore 1969" (#RIGHT116) is being released by RightRecordings.com  with the full backing of Sue Wayne, widow of the late, great Carl Wayne. The 2CD edition has significantly greater content than the download edition including a 10:30 long version of "I Can Hear The Grass Grow" as well as a near 11 minute recollection of that US tour by Bev Bevan. Here is the text of the official press release from RightRecordings.com thus:

"The Move were one of the 60’s most controversial and legendary groups and one of the most contradictory. A string of memorable hit singles, all written by pop genius Roy Wood, were set against a musically thrilling and often brutal live act, centred around lead singer Carl Wayne. The band achieved major recording success with UK and European hits including: "Blackberry Way"; "Fire Brigade"; "Curly"; "Night Of Fear"; "I Can Hear The Grass Grow" and "Flowers In The Rain" - the first ever record played on BBC Radio 1 ... Thought lost for over 30 years, the master tapes from The Move’s shows at the Fillmore West were saved by Carl Wayne but suffered technical problems and could not be released. Thanks to advances in studio technology, Carl began restoring the tapes in 2003. Sadly Carl died in 2004 and was never able to complete the live album he believed would show how incredible The Move was as a live band. Now, with the full co-operation and permission of his wife - Sue Wayne - the tapes have been painstakingly restored, remastered and released in memory of The Move’s dynamic front man and lead singer."

And here is some really great news ... all pre-orders for the 2CD are being despatched (prior to the above 'official' release date) from Wednesday 1st February onwards (Ed: this date has obviously also slipped too!). The basic set is attractively priced at just £10.99 each and you can also have the release signed by The Move co-founder Bev Bevan (also supplied with a Collectors Edition Move postcard) at just £15 each. A special edition T-Shirt (normally priced at £25) is also on offer with the 2CD (if ordered together) for just £20. Fans of The Move should enter promotional code: Move1969 at the checkout stage for free worldwide postage. You can pre-order this excellent release directly here:

ELO Beatles Forever (ELOBF) recommends "Live At The Fillmore 1969" by The Move to those enlightened folks who enjoy the music of ELO/Jeff Lynne, Bev Bevan, Roy Wood, Wizzard, 'Brum Beat', The Beatles and related artistes.