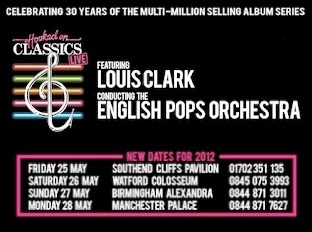 #287: Hello ... Hello ... my old friends ... It's great to see you once again! When Louis Clark isn't pulling the strings (literally!) in The Orchestra (former members of ELO and ELO Part II), he is out and about either conducting other orchestras or he is involved with Hooked On Classics - the musical phenomenon he created some three decades ago which has sold over 13 million copies worldwide and has now returned to the live format.

In fact, Yours Truly KJS is reliably informed that the concert at the BIC in Bournemouth on Thursday 22nd December was sold out and very well received by press, public and critics alike with a set list that included "Hey Jude" and Louis' fantastic string arrangements on the classic ELO track "Eldorado Overture". You'll therefore be pleased to hear that a new four date Spring 2012 tour has been announced between Friday 25th and Monday 28th May next year wherein Sir Lou Clark will again conduct the English Pops Orchestra and take us through those classical classics via Hooked On Classics - LIVE in his own unique style. You can visit the Hooked On Classics web site or view the official advert by clicking on these links thus: