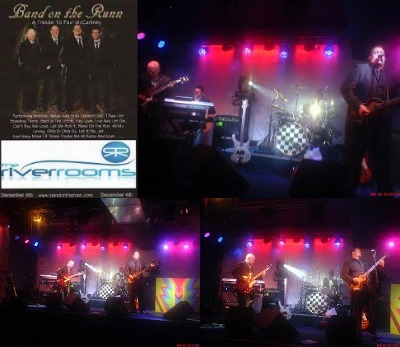 #280: Hello ... Hello ... my old friends ... It's great to see you once again! Yours Truly KJS travelled the ten [10] miles or so to Stourbridge last night [Sunday 4th December] in order to attend what was only my second ever Band On The Runn gig at the marvellous River Rooms venue.
Band On The Runn are a relatively new West Midlands based act who perform a wide-ranging set covering most [if not all] of the musical career of Sir Paul McCartney and have been previously featured on ELO Beatles Forever [ELOBF] thus:
UP AND RUNNING: BAND ON THE RUNN RECOMMENDED: BAND ON THE RUNN

As mentioned before; it is a great pleasure of mine to be able to able to go out and about to hear, see and support local bands in the ELO and Beatles universe doing their thing. During the unbroken two [2] hour set last night, Band On The Runn demonstrated a noticeable increase in maturity and looked a lot more comfortable in front of the appreciative audience. In short, I would say that the band graduated last night onto the next level of their musical journey.

The fine keyboard work of Adam Willetts ably supported the driving percussion of Dave Cottle whilst the sublime guitar work of Ian Hammond was a marvellous foil to lead vocalist, guitarist and piano tinkler Craig Whale as the band re-interpreted those classic compositions of Paul McCartney from the very first Beatles album right through his Wings career and beyond. All the familiar songs were there and the set hinged nicely around most of the "Band On The Run" album.

It was a successful gig in this writers opinion but a band like this should be headlining venues on a Friday or Saturday night to maximize their potential and that of their potential fan base. A tight, accomplished performance produced great live versions of "Jet"; "Flaming Pie"; "Hey Jude"; "Coming Up"; "Back In The USSR"; "Hey Jude"; "Let 'Em In"; "My Love"; "Live And Let Die"; "1985"; "Let It Be" and "Drive My Car" amongst not a few others. But for me - once again - my fave song of the night was "The Long And Winding Road".

ELO Beatles Forever [ELOBF] recommends Band On The Runn to those enlightened folks who enjoy the music of ELO & Jeff Lynne, Roy Wood, The Move, The Idle Race, The Beatles, 'Brum Beat' and related artistes.