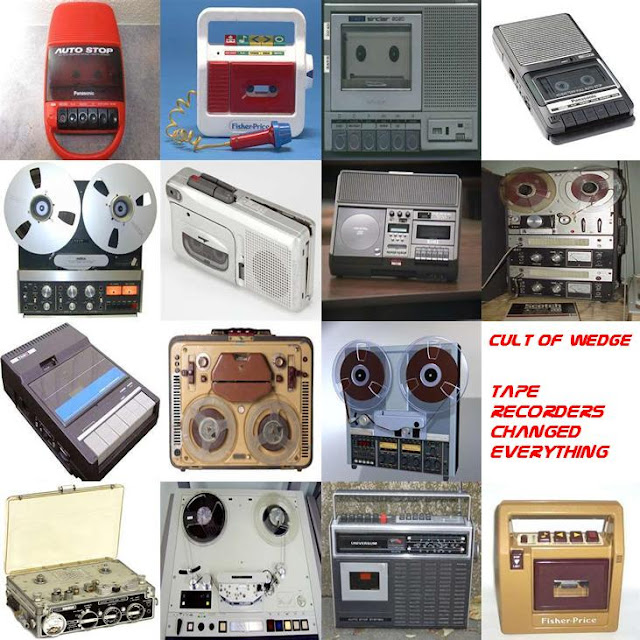 #267: Hello ... Hello ... my old friends ... It's great to see you once again! Whilst there advantages and disadvantages to being out and about on social media, there are also not a few positives. Yours Truly KJS has made some great friends and acquaintances and 'met' with some great musicians. One of those talented folks whom I have engaged with is a certain Pete Hackett.

Pete's debut album, curiously titled "Tape Recorders Changed Everything" and released under his musical alter ego: Cult of Wedge, has just been released and you can download it via this link for just £3 in download format thus:

"CULT OF WEDGE is the musical alter ego of Pete Hackett. It's a bit like a car crash involving members of ELO, Genesis, The Human League, Kraftwerk, Motorhead and Yes. With John Shaft and Starsky and Hutch being the first on the scene, with Beck and Air driving the ambulances"

Ably supported on three of the tracks by the sublime backing vocals of Maxi Dunn, this ten track album displays more than just the musical influence of our beloved ELO (and the other artistes cited above), I can indeed detect Jeff Lynne inspired melodies and arrangements but there is a dab of The Beatles, 10cc and even Pulp on here too - in the opinion of this writer. I have to say that this wide ranging and eclectic set of songs which adds up to a great debut both in terms of content and production values. There's even a Stylophone on here folks!

From the strong opening song "The Lemon At The Centre Of The Universe" through to "Malevolent Black Snow", we hear a set of compositions that are a delight to the ears. Especially after a couple of listens. There are different genres on show here but the beauty of this CD is that very variety and those pleasing audio tweaks. And you'd expect that with song titles like "Christopher Walken"! My personal faves are "The Lemon At The Centre Of The Universe", "Cabaret" (just how many band names can you fit in a song?), "Tape Recorders Changed Everything" (an affectionate love song to the C-60 and C-90 et al but also a superb track!), "St. George And The Dragon" and "The Birds And The Bees And Jaime".

ELOBF hopes to interview Pete Hackett and, by extension, Cult of Wedge about this likeable new release soon. ELO Beatles Forever (ELOBF) recommends "Tape Recorders Changed Everything" by Cult of Wedge to those enlightened folks who enjoy the music of ELO/Jeff Lynne, Roy Wood, The Move, The Idle Race, 'Brum Beat', The Beatles and related artistes.