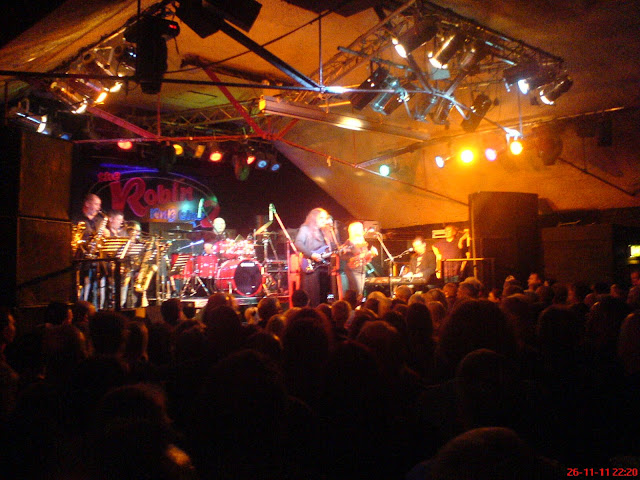 #276: Hello ... Hello ... my old friends ... It's great to see you once again! Yours Truly KJS made a last gasp decision last night to travel solo downtown Bilston to go and see the aptly entitled Roy Wood Rock 'n' Roll Band 'I Wish It Could Be Christmas Everyday' Midlands Extravaganza. And the full house at The Robin 2 were treated to another sixty minute trawl through Roy's (The) Move, Wizzard and solo "Music Book" - to coin a phrase and quote his latest release thus:

When you attend a Roy Wood gig, your memory is reignited about his legendary song writing treasure chest and the sheer magical, musical instrumental prowess of the co-founder of The Move and the Electric Light Orchestra (ELO) as well as being the founder of Wizzard et al.

It really is superb to hear his four-piece brass section supplement his other musical troops as they plough through those well-known songs we all know and love like: "Blackberry Way", "Flowers In The Rain", "I Can Hear The Grass Grow", "See My Baby Jive", "Ball Park Incident", "Angel Fingers" and - naturally - "I Wish It Could Be Christmas Every Day" as well as more recent Woody compositions "Big Girl Blues",  "Boadicea" and "New York City". It was also great to see Roy get those bagpipes out again during "Are You Ready To Rock?". Another highlight of the night was after telling the buzzing crowd that he had slipped two discs and might utilize his stool ... until a member of his band asked if they were two of his golden ones! It was also nice to bump into Martin Kinch (of Cherry Blossom Clinic fame) as well as Robin 2 regulars Paul Richardson, Andy 'Fruity Buckfoot' Wood and his wife Sue. I have to say it was a great night and well worth the wait for such a relatively short set.

Don't forget that there is plenty of time for you to catch Roy live in the coming days! Roy Wood is touring with Status Quo as part of their Quofestive 2011 tour, with Kim Wilde, during December:
ELO Beatles Forever (ELOBF) recommends Roy Wood to those enlightened folks who enjoy the music of ELO/Jeff Lynne, Wizzard, The Move, The Idle Race, 'Brum Beat', The Beatles and related artistes.