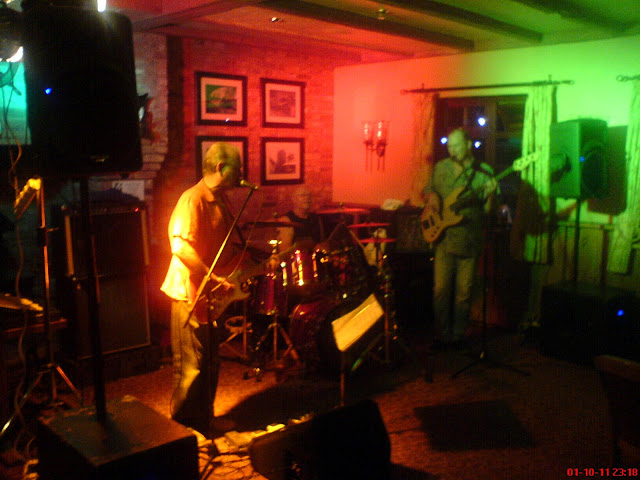 #253: Hello ... Hello ... my old friends ... It's great to see you once again! Sometimes you make a last minute decision and it pays off big time! On the evening of Saturday 1st October, Yours Truly KJS travelled the thirty odd miles to The Waterfront in Barton-under-Needwood in Staffordshire from Wolverhampton with my brother and niece to attend my second Trevor Burton Band gig featuring (not surprisingly) Trevor Burton (founding member of The Move from 1966-1969) and his band: Bill Jefferson (drums/percussion) and Pez Connor (bass guitar/backing vocals) thus:

On a warm October night astride Barton Marina, this compact and family-like trio - fronted by a legendary blues guitarist who is sadly not given nearly enough local or national recognition for his talents - belted out a wide range of blues songs [and some rock 'n'roll] to give those assembled a flavour - in Trevor's own unique style - of the influence of and his friendship with Jimi Hendrix, as recalled himself on the night.

The band were again very tight. It was truly amazing to see the dynamics of this trio as Trevor's two band mates waited on his every chord. The power percussion of Bill and the driving heartbeat of Pez' bass playing were a joy to behold. Even though they were (musically) in awe of Trev, it really was like watching big brother playing with his two 'younger' charges.

Last night, The Trevor Burton Band delivered a stunning 13 minute version of "Sunshine Of Your Love", a fantastic encore of Bruce Springsteen's "No Surrender", a tribute to Buddy Holly with "Peggy Sue" plus Wilson Pickett's "634-5678", his own "Down Down Down" (recorded by none other than Dave Edmunds) and Hendrix's very own "Hey Joe" - amongst not a few others. But for me, the highlight of the night had to be getting to finally hear their famed interpretation of "Werewolves Of London"! Many thanx to Pez Connor for that! Here's a taster of it for you to appreciate from a 2009 performance at the Legends Blues Club in Tamworth thus: