#241: One of the benefits of social media is having the opportunity to 'meet' and dialogue with people who normally would never cross your path for a variety of reasons. Back in 2010 - via a mutual Facebook 'friend' - and as a result of our shared interests in the song construction and compositions of Jeff Lynne (ELO) and our mutual respect for Kelly Groucutt as well as an appreciation of several music genres - Yours Truly KJS connected with musical maestro and virtuoso Steve Midgley.

Throughout the last year we have 'chatted' and dialogued on his musical history; his current musical projects and life in general. Steve - a self-avowed 'wiccan' - was a humorous and enigmatic person with his fair share of issues. Although we had differing world views; we shared a mutual catalogue of bad jokes and puns w.r.t. Cliff Richard and often discussed other thorny topics. 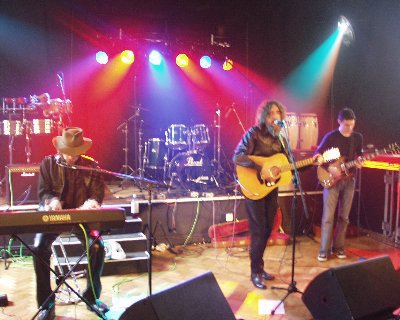 Steve (above left) was a producer and multi-instrumentalist who - besides being a solo and group artiste in The Lounge LIZZards - had recorded some ELO related material both individually ("Sweet Talkin' Woman") - Please check out the above ELOBF 'YouTube' tribute, with Sean Mack Page ("Oh No Not Susan") and Andy Wood (above centre)("Between Good Friends") amongst others.

He had a great desire to reinterpret some of those ELO classics that he loved. He asked me a few times to help him find a cellist or violinist! But after all that time we spent 'talking' on Facebook chat and the ensuing email correspondence, I now regret that I didn't pick up the telephone to talk to or meet up with him. We had more than one common thread.

I was so very deeply saddened and indeed shocked to learn today that Steve passed away this morning at the age of just 31 years. It is my personal belief that a fitting tribute to Steve would be to remember his own musical craft; his wit; willingness to share his gifting as well as his love of the Electric Light Orchestra. My condolences and sympathies are extended to Steve, his family and many, many friends.