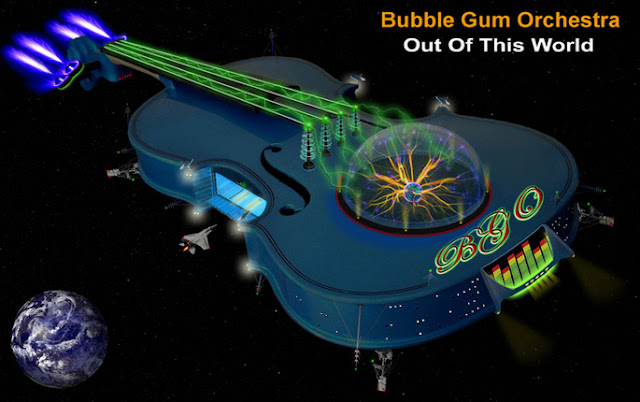 #249: Hello ... Hello ... my old friends ... It's great to see you once again! I find it interesting that some postings about a new ELO related project entitled Bubble Gum Orchestra (BGO) have started to sprout up both on Facebook and elsewhere as their new album "Out Of This World" is released on Tuesday 27th September. What is also interesting is that they have dropped a comment or two on some of my recent [non-related] blogs plus they're following ELO Beatles Forever (ELOBF) too!

If you click on the above link; you can hear the lead single "Night In Shangri-La" and check out their web site. The project is to be the brainchild of Michael Laine Hildebrandt. The style; artwork and even track listing demonstrate a remarkable deference to and is a fitting tribute to ELO's iconic double album "Out Of The Blue" - particularly when one considers that OOTB was originally slated to be entitled "Out Of This World" anyway! Here is what BGO say about themselves:

"Bubble Gum Orchestra is an American band with a flair of English pop rock influences among many others. Michael Laine Hildebrandt - songwriter; composer; singer and all-round "guru" has composed a 17 song gem rooted deep from his influences of the 70's era style "double album" days of yesteryear."

Yours Truly KJS really quite likes "Night In Shangri-La" which is full of ELO song title citations and is very catchy. Here is the track listing for the album for your perusal:

ELO Beatles Forever (ELOBF) has contacted Michael and BGO and hopes to arrange a long distance interview in the next few weeks, hoping to assist BGO in promoting what looks like being an interesting release for fans of not only ELO but also other class bands from a superlative musical decade. Expect a review of "Out Of This World" in the next few weeks folks!