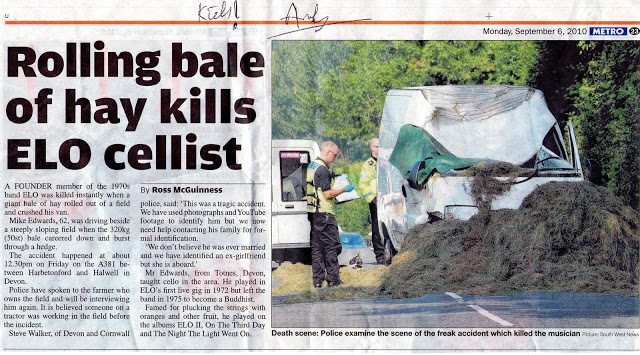 #250: Hello ... Hello ... my old friends ... It's great to see you once again! We all thought that the tragic and unfortunate death of former ELO cellist Mike Edwards on Friday 3rd September last year and all the legal machinations thereof were concluded upon the verdict of "accidental death" at his inquest in March:

Henceforth, Yours Truly KJS was most surprised to receive (another) telephone call earlier today when I arrived home from work from Pete Reynolds - my roving reporter down in South Devon - informing me that there have been some further developments in this sad story, as reported today in the South Devon Herald Express (a.k.a. This Is South Devon) thus:

You can read the full report if you click on the above link. Here is an excerpt outlining the case:

"Two men are to appear in court charged with offences linked to the death of former ELO musician Mike Edwards who was killed by a runaway bale of silage ... (they) ... have been charged with health and safety offences relating to operations on farm land at Halwell, near Totnes ... (and) ... are due to appear before magistrates in Torquay on Friday, October 14, after a previous hearing was adjourned. The 62-year-old Totnes musician, who was a member of the Electric Light Orchestra in the 1970's; died after the quarter-tonne bale rolled 60 yards down a steep field, crashed through a hedge and landed on the cab of his van as he drove along the A381 last September, crushing him to death."