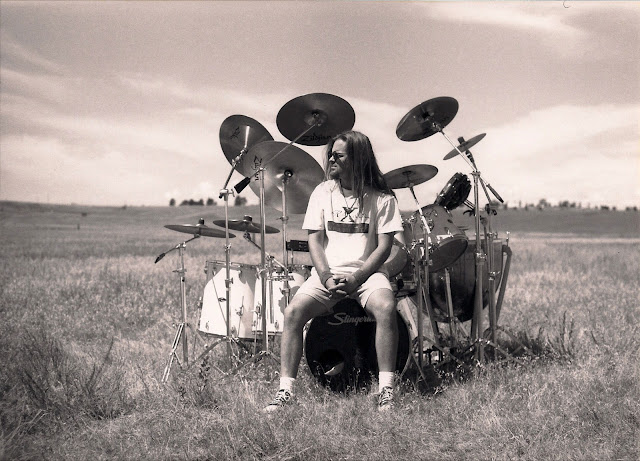 #248: Hello ... Hello ... my old friends ... It's great to see you once again! Greetings to multi-talented musician and my good friend Sean Mack Page for this exclusive ELOBF interview:

KJS: Sean ... please tell the folks about how we crossed paths - how we came to meet up?
SMP: My band Fragile X did a cover of “Turn to Stone” and it was posted on the ELO Discovery web site by Nico, their web master! Fragile X were listed on the site next to an ELO compilation album. I was experimenting with various ideas on how to market my newest band called Imaginos at the time. I saw that there was a growing interest in the music of Fragile X, so I began researching various ways in marketing the music. Jason Brown, the drummer for Burn Sand Burn (a local band in the Denver area) told me about MySpace and that eventually led me to pursue Facebook and Reverbnation; both being vehicles to help promote my music! From that point, I believe we began talking over on Facebook about our mutual ELO interest! This was the beginning of our friendship!
KJS: Can you tell me about your physical and musical backgrounds?
SMP: I have always had an interest in drums and music ever since I can remember! I practically wore out my grandparents 'America' record listening to "Horse With No Name"! I used to listen to "Turn To Stone" and "Sweet Talkin' Woman" by ELO on the AM transistor radio hanging from the handle bars of my bicycle before I really knew who they were! When I was nine years old, I was injured severely by a gunshot; thus I strived to find some method of fitting in and being accepted. Over the years, I tried several musical instruments including drums and percussion. Drums were very beneficial, and helped me cope with my Post Traumatic Stress Disorder (PTSD) throughout the years - without actually being diagnosed professionally! During my freshman year in High School, Karl Knox, a friend of mine in a marching band, sold me an old beat-up 'Rogers' Drum Kit - that was incomplete! I knew within a week that drums are what I wanted to play! When I was sixteen years old, I got a new black 'Ludwig' drum kit for Christmas! I was ecstatic to say the least. I always loved the 'Rock' genre, and was especially interested and influenced by ELO and my idol Bev Bevan, their drummer. I also enjoy metal, classical, big band era, oldies and all of these music styles influenced my playing! I am now finally in recovery from PTSD and I wanted to share my story with others to let them know how healing music can be! It is very good that I have incredible support from friends and family. I am truly blessed, and very grateful for my life.
KJS: What bands were (and are) your musical influences besides ELO?
SMP: I can’t help myself Keith! ELO; ELO Part II; The Move; Rush; Pink Floyd; Savatage; The Guess Who; Evanescence; Black Sabbath; Led Zeppelin; Slayer; Metallica; Metal Church; King Crimson; Mozart; Bach; Beethoven and Vivaldi are definite influences - to name a few! I love all the musicians that played in ELO over the years!! Bev Bevan and Kelly Groucutt will always be very special to me! When I opened for ELO Part II in 1996, I got to meet everybody and spend time backstage with the whole group - a dream come true! I enjoy the amazing writing of Jeff Lynne! My other favourite musicians are: Neal Peart; Alex Lifeson; Geddy Lee (Rush); Tony Iommi; Bill Ward and Geezer Butler from Black Sabbath. My first record was "Herman's Hermits Greatest Hits" so I also have to list them as one of my early influences! "Mrs. Brown certainly had a lovely daughter!" Other drummers that I like are: Gene Krupa; Carl Palmer (ELP; Asia); Steve "Doc" Walchoz and Jimmy Vincent [Louis Prema Orchestra]. Jimmy did a mean "Sing, Sing, Sing"! Buddy Rich; Butch Miles and Sandy Nelson are awesome drummers too!
KJS: You have been a member of quite a few bands Sean! Onyx Rook; Cat Bleu; Navigator; Fragile X; Imaginos to name a few! Can you tell me about those bands and what they were about?
SMP: Currently, I am actively working with all these bands. That is partially the reason that I have taken so long in getting this interview finished for you, Keith!
Onyx Rook was my first real band; it was heavy metal, influenced by bands like Metal Church; King Diamond; Metallica; S.O.D. and Slayer. It was the first of my bands to receive airplay! We were played on Z-Rock Radio nationally and in Denver; Colorado. There were six members of the band over the years! The remastered demo is available directly through me for special friends and fans! To this day Onyx Rook remains an underground fan favourite! There are no web sites!
Cat Bleu is a three-piece group which has that blues-disco-funk-rock-metal sound! 'The Cat' has an attitude! We just released "Don’t Bury Me" and I've heard that Bryan Spainhower is working on new material! Bryan and Brian Nicks co-write most of the Cat Bleu material.
Navigator is my solo project. I'm currently working on a new release called “Song For You” which has been two years in the making. I think it will be a song that many can relate to as it evolved over a lost relationship! I’m very proud of what I’ve been able to accomplish in my studio for Navigator and my ELO influence really shines through with this newest song!

KJS: I would like to take the opportunity to thank Sean for participating in this trans-Atlantic interview.
SMP: Keith, thanks so very much for your help and support. Without ELOBF, Frances Pope and Gino DiPierro - my music would still be sitting on the shelves of corporate radio collecting dust! Because of you folks, 'Sean Page's Army', my band members, the other DJ's, friends and fans, I am successful. I'm now on worldwide radio with the continued support of the ELO family! Thanks again so much my friends!