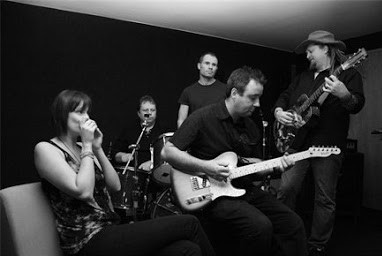 #236: Hello ... Hello ... my old friends ... It's great to see you once again! At long last, Yours Truly KJS travelled down to the wonderful Katie Fitzgerald's in Stourbridge on the evening of Saturday 6th August for the very first time to see Paul Parker & All The Right Friends in live action. The reason I went to this gig was because I wanted to honour a pledge that I made to my friend Phil Rose at a BBBV concert in Shrewsbury earlier this year that ELO Beatles Forever (ELOBF) would go and see him perform in the above mentioned band. Phil shares my love for the music of ELO and is an accomplished bass guitarist himself.

I spoke to Phil and Paul Parker before the gig about what the band were about, their set list and whether they had ventured into the ELO universe, musically speaking. In the recent past, the band have covered "Rock 'n' Roll Is King" and "California Man" but the set last night was fantastic, including not only their own material but their interpretation of many standards of differing genres including: "The Joker", "Fisherman's Blues", "Babylon", "Listen To The Music", "Landslide", "Wicked Game" and (quite naturally) "Cliff Richard Wrecked My Marriage". I was especially thrilled by the three performances the band produced of Tom Petty classics "Free Fallin'", "Learning To Fly" and "Mary Jane's Last Dance" - the first two of which were of course Jeff Lynne co-compositions and productions back in 1989 and 1991. Throughout the whole gig we witnessed a great exposition of banjo, mandolin, rhythm and steel guitar work by Paul, who led his tight if not talented quintet impressively.

Paul Parker And All The Right Friends are: Paul Parker, Adelle Parker, Phil Rose, Matt Parton and Roger Preston. Check out the band via their web site and Facebook page thus:

ELO Beatles Forever (ELOBF) recommends Paul Parker and All the Right Friends to those enlightened folks who also like ELO, Jeff Lynne, Roy Wood, 'Brum Beat', The Idle Race, The Move, The Beatles and related artistes.