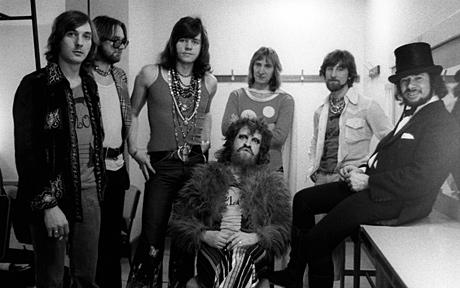 #132: Hello ... Hello ... my old friends ... It's great to see you once again! This news is so sad. Mike Edwards, formerly a member of ELO was killed on Friday 3rd September in South Devon, England in an unbelievably unlucky accident. Here is the text of the report in The Telegraph:

"Mike Edwards, 62, was a founding member of ELO and played cello with the group from their first live gig in 1972 until he departed in January 1975. He quit to become a Buddhist and later changed his name to Deva Pramada because of his religious convictions. His eccentric cello playing - including plucking the strings with an orange or grapefruit - and bizarre costumes were a major ingredient of ELO. He played cello on albums ELO II, On the Third Day, The Night The Light Went On [In Long Beach] and Eldorado. Mr. Edwards died instantly when he was hit by the bale which weighed nearly 700lbs. He was driving along a road when the bale careered down a slope in a field and flipped over a hedge - smashing down onto his roof.

The circular bale is believed to have been in a steeply-sloping field beside the road when it somehow rolled and jumped 12ft to 15ft into traffic. Police said the accident happened at around 12.30pm on Friday on the A381 between Harbetonford and Halwell in Devon. Steve Walker of the Devon and Cornwall police traffic unit said they were trying to contact his family. He said: ''This was a tragic accident and we have now identified the victim as Michael Edwards, a founder member of ELO. ''We have used photographs and YouTube footage to identify him but we now need help contacting his family for formal identification. ''We don't believe he was ever married and we have identified an ex girlfriend but she is currently aboard. ''We think he may have a brother called David in the Yorkshire area and we obviously need to contact him. ''Michael has no immediate family but we believe he may have taught some cello in Devon and would ask his students to contact us if they know of any relations.'' Mr Edwards had been living in Totnes, Devon. After he left ELO, he was replaced as cellist by Melvyn Gale."