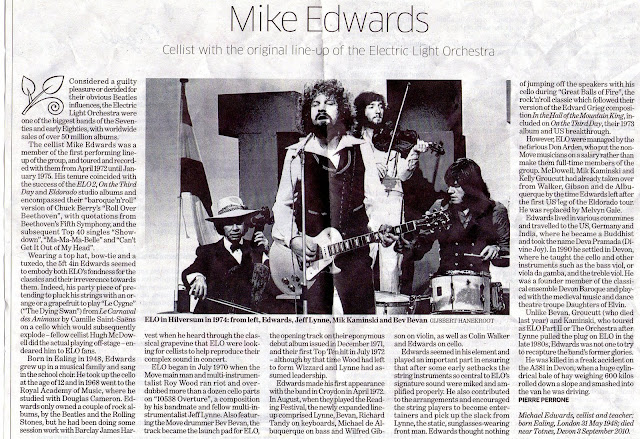 #136: Hello ... Hello ... my old friends ... It's great to see you once again! A really nice obituary for Mike Edwards (complete with a decent overview of the history of ELO) can be found in The Independent newspaper here in England today (Thursday 9th September) thus:

Mike Edwards: Cellist with the original line-up of the Electric Light Orchestra
The cellist Mike Edwards was a member of the first performing line-up of the group, and toured and recorded with them from April 1972 until January 1975. His tenure coincided with the success of the ELO 2, On the Third Day and Eldorado studio albums and encompassed their "baroque'n'roll" version of Chuck Berry's "Roll Over Beethoven", with quotations from Beethoven's Fifth Symphony, and the subsequent Top 40 singles "Showdown", "Ma-Ma-Ma-Belle" and "Can't Get It Out of My Head".

Wearing a top hat, bow-tie and a tuxedo, the 5ft 4in Edwards seemed to embody both ELO's fondness for the classics and their irreverence towards them. Indeed, his party piece of pretending to pluck his strings with an orange or a grapefruit to play "Le Cygne" ("The Dying Swan") from Le Carnaval des Animaux by Camille Saint-Saëns on a cello which would subsequently explode – fellow cellist Hugh McDowell did the actual playing off-stage – endeared him to ELO fans.

Born in Ealing in 1948, Edwards grew up in a musical family and sang in the school choir. He took up the cello at the age of 12 and in 1968 went to the Royal Academy of Music, where he studied with Douglas Cameron. Edwards only owned a couple of rock albums, by the Beatles and the Rolling Stones, but he had been doing some session work with Barclay James Harvest when he heard through the classical grapevine that ELO were looking for cellists to help reproduce their complex sound in concert.

ELO began in July 1970 when the Move main man and multi-instrumentalist Roy Wood ran riot and overdubbed more than a dozen cello parts on "10538 Overture", a composition by his bandmate and fellow multi-instrumentalist Jeff Lynne. Also featuring the Move drummer Bev Bevan, the track became the launch pad for ELO, the opening track on their eponymous debut album issued in December 1971, and their first Top Ten hit in July 1972 – although by that time Wood had left to form Wizzard and Lynne had assumed leadership.

Edwards made his first appearance with the band in Croydon in April 1972. In August, when they played the Reading Festival, the newly expanded line-up comprised Lynne, Bevan, Richard Tandy on keyboards, Michael de Albuquerque on bass and Wilfred Gibson on violin, as well as Colin Walker and Edwards on cello.

Edwards seemed in his element and played an important part in ensuring that after some early setbacks the string instruments so central to ELO's signature sound were miked and amplified properly. He also contributed to the arrangements and encouraged the string players to become entertainers and pick up the slack from Lynne, the static, sunglasses-wearing front man. Edwards thought nothing of jumping off the speakers with his cello during "Great Balls of Fire", the rock'n'roll classic which followed their version of the Edvard Grieg composition In the Hall of the Mountain King, included on On the Third Day, their 1973 album and US breakthrough.

However, ELO were managed by the nefarious Don Arden, who put the non-Move musicians on a salary rather than make them full-time members of the group. McDowell, Mik Kaminski and Kelly Groucutt had already taken over from Walker, Gibson and de Albuquerque by the time Edwards left after the first US leg of the Eldorado tour. He was replaced by Melvyn Gale.

Edwards lived in various communes and travelled to the US, Germany and India, where he became a Buddhist and took the name Deva Pramada (Divine Joy). In 1990 he settled in Devon, where he taught the cello and other instruments such as the bass viol, or viola da gamba, and the treble viol. He was a founder member of the classical ensemble Devon Baroque and play-ed with the medieval music and dance theatre troupe Daughters of Elvin.

Unlike Bevan, Groucutt (who died last year) and Kaminski, who toured as ELO Part II or The Orchestra after Lynne pulled the plug on ELO in the late 1980s, Edwards was not one to try to recapture the band's former glories.

He was killed in a freak accident on the A381 in Devon, when a huge cylindrical bale of hay weighing 600 kilos rolled down a slope and smashed into the van he was driving. [Pierre Perrone]