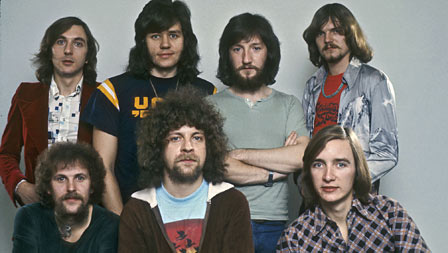 #130: Hello ... Hello ... my old friends ... It's great to see you once again! With many thanx to my ELO gig buddy Christian 'Underture' Evans for alerting me to this news nugget - courtesy of Kevin O'Meara - via www.elodiscovery.com thus:

"A documentary charting the story of Jeff Lynne will be broadcast on the British TV channel BBC4 fall 2010/early 2011. The press presentation contains this enigmatic sentence: "The programme follows the band through their successes, up to their brand new ELO album – their first for almost 10 years". A new Jeff Lynne solo album is scheduled, not an Electric Light Orchestra album ..."

Here is the text of this exciting BBC Press Office release plus hyperlink:

"40 Light Years: Charting the fascinating story of musical genius, singer-songwriter, producer, multi-instrumentalist and Electric Light Orchestra leader Jeff Lynne, this film celebrates 40 years since ELO's first groundbreaking hit recording. The programme follows the band through their successes, up to their brand new ELO album - their first for almost 10 years. With exclusive access to Jeff Lynne, this documentary charts his story from his early years in Birmingham with cult legends the Idle Race, through to his first UK chart success with the Move. It also investigates his international mega-stardom with ELO and beyond, with The Traveling Wilburys - Tom Petty, Roy Orbison, George Harrison and Bob Dylan - Paul McCartney, Ringo Starr, the Beatles, Del Shannon, Regina Spektor and many more. SG"