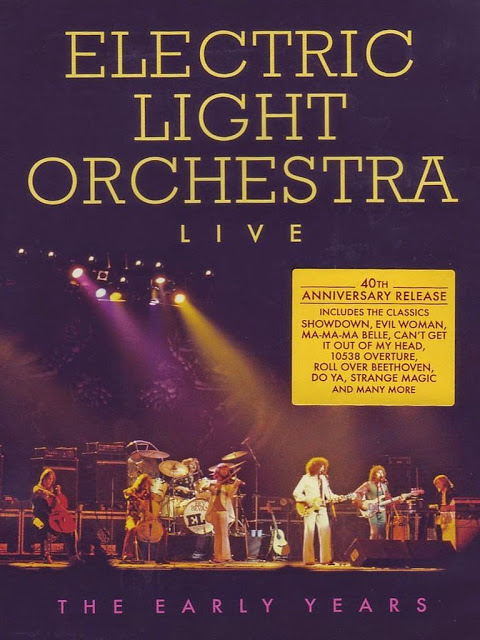 #125: Hello ... Hello ... my old friends ... It's great to see you once again! Exactly a week ago today on Monday 9th August, Yours Truly KJS returned home from work to find a copy of the new DVD release by entitled "Live - The Early Years" by our beloved Electric Light Orchestra [Eagle Rock Entertainment #EREDV780/111 minutes] waiting patiently to be reviewed by ELOBF. Here are two of my earlier articles on the subject of this release thus:

I am not going to trawl over each and every track. You need to get a hold of this DVD your good selves and do that in your own good time. But what I am going to say is this. After seeing very many bootleg CD's of these gigs and the release of the "Electric Light Orchestra - In Performance - The Seventies" DVD last year, we are at last privy to the first ever decent official issue of live ELO footage from before the multi-released "Out Of The Blue Tour" material at Wembley in 1978. 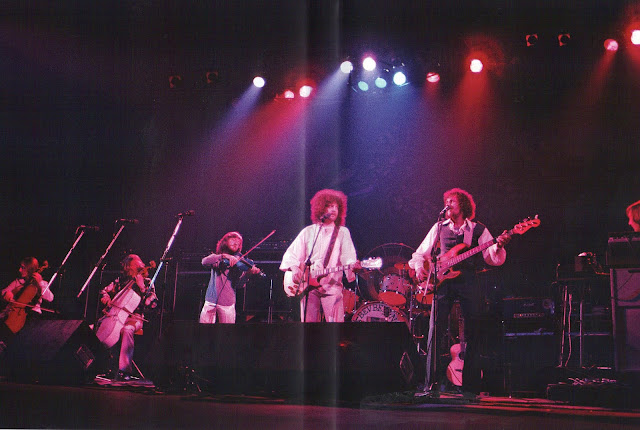 This new release includes excerpts from three gigs at Brunel University in 1973, the German 'Rockpalast' session from 1974 [including an abridged and obtuse interview afterwards] and the 1976 "Fusion" gig from the New Victoria Theatre in London. I have to say that the quality of the video and music soundtrack is the best that I have ever seen or heard for live ELO recordings. The first two concerts feature the ELO line-up for the "On The Third Day" and "Eldorado" albums. The guys look so young! The craft of Jeff Lynne is there to be seen but I was also taken by the great stage acoustics of the string section, the keyboard magic of Richard Tandy and the 'presence' of the slightly croaky [at times!] Mike De Albuquerque. No wonder the Americans were blown away by those early "Do It With The Light On" coast-to-coast tours and why their first major successes were in the US Billboard charts rather than our own Top 40.

It's nice to see the whole of the "Fusion" video release from 1990 [Pickwick/#PTR2152] included here too. The difference between this release and the original video &/or the aforementioned "In Concert" DVD is that this is the real deal. For the first time, we can see and hear clearly the sound mechanics of the classic ELO line-up including the late, great Kelly Groucutt. I was reminded when watching this concert just how much input he had in terms of vocals and co-vocals with Jeff Lynne. You can maybe begin to see how sad it was that he left the band in 1983 and that he and Jeff were still [musically] estranged when he died last year. Hopefully this full duration CD/DVD set of the gig will see the light of day next month thus:

Maybe Eagle Rock Entertainment should consider issuing the ELO Part II concert with the Moscow Symphony Orchestra from May 1991 [Telstar/#TVE1037] on DVD too? I only mention this because the copyright for this new DVD release is with 'Arden Enterprises'. Being as they were the 'Executive Producers' for those ELO/MSO gigs, then maybe the Ardens or 'Rockview Promotions' still own those rights and might be open to offers? Considering that 2010 was supposed to be ELO's 40th Anniversary, there has been precious little activity on the ELO & Jeff Lynne CD re-master front so this exciting release by Eagle Vision is certainly one to be embraced.

ELO Beatles Forever [ELOBF] recommends "Live: The Early Years" by the Electric Light Orchestra to those enlightened folks who enjoy the music of ELO, Jeff Lynne, Roy Wood, The Move, The Idle Race, 'Brum Beat', The Beatles and related artistes.