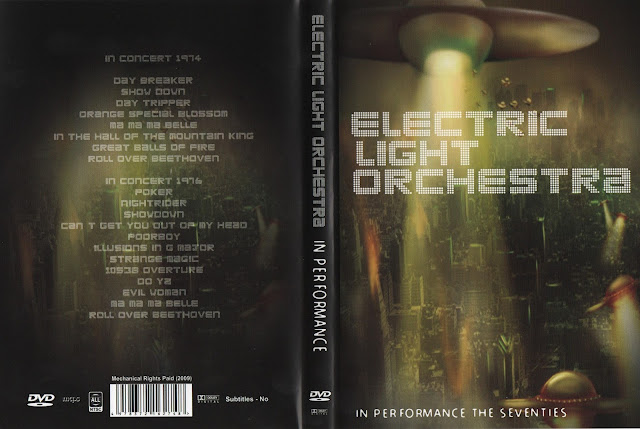 #119: Hello ... Hello ... my old friends ... It's great to see you once again! ELO Beatles Forever (ELOBF) came across this interesting info via www.elodiscovery.com yesterday:

"A DVD and a CD entitled "ELO - Live In London 1976" will be released on 14th September 2010. There is not a lot of information about these items but I suppose it's the "Fusion" concert at the New Victoria Theatre in London in 1976 during the "Face The Music" tour. Up to now, It has only been available on video tape since 1990. If that is the case, let's hope the show will be complete. In fact, the full show was filmed but quite a few songs were missing from the video release. Wait and see for more details ... (for your information, this concert will be available in the 1990 version with the DVD “Electric Light Orchestra - Live - The Early Years" which will be released on 9th August 2010)"

My thoughts are that the rights have obviously been sold in order for this concert to be published practically twice in two months. Yours Truly KJS thinx that it would be equally good if a veritable music video &/or DVD publisher would get a hold of the rights to the ELO Part II gig with the MSO from May 1991 - released originally by Telstar (#TVE1037) - and put that out on DVD too!

On a similar thread: If it is truly ELO's (supposed) 40th anniversary this year, shouldn't Sony BMG be considering the release of a definitive ELO video hits compilation? The Telstar release in 1991 (#TVE1033) was incomplete to say the least.