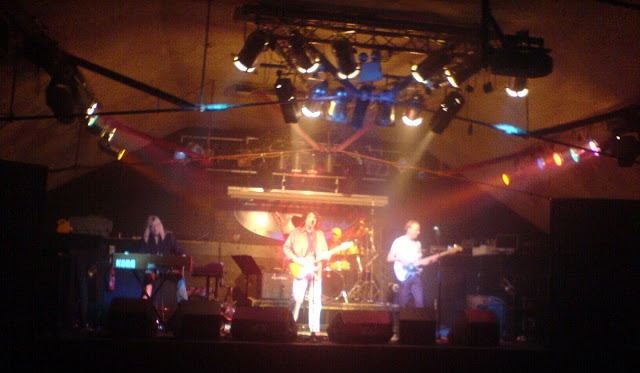 #121: Hello ... Hello ... my old friends ... It's great to see you once again! Last night's gig by Phil Bates' new project Wheels Of Fire was a concert to savour. In front of a lively crowd at The Robin 2 in Bilston near Wolverhampton - this 'new' outfit performed THE classic tribute to the R&B's classic artistes including BB King, Cream, Peter Green, Jimi Hendrix et al. The set list was - naturally - distinguished and the notable renditions (in my opinion) were "Wishing Well", "While My Guitar Gently Weeps", "Layla" and a funked-up version of The Beatles' "Daytripper" - a song covered (of course) in those early live sets of the Electric Light Orchestra.

Sadly there was no "Ma Ma Ma Belle" but this is no criticism of the band. I did have a few brief words with Phil but time was short and the gig was ready to roll. If you have heard Phil's professional and incisive guitar work when he has played with ELO Part II or The Orchestra or the Beatles; Blues and Blue Violin Project, then last night's gig was a further and more diverse showcase for the full range of  his rhythm guitar musicianship. That is not to ignore the tight musical unit that is Wheels Of Fire and also includes Brian Badhams on bass guitar, Clive Bunker on drums/percussion and last - but not least - Mark Stanway on keyboards - formerly of ELO's Jet Records one-time label mates Magnum. Speaking of which, I always remember Magnum's 1982 "Chase The Dragon" LP (#JETLP235). It was Mark Stanway's first studio album with the outfit which was produced by Jeff Glixman - later to produce ELO Part II's eponymously titled first album in 1991 (#STAR2503). The links with ELO go a little deeper when you recall that Phil Bates was also a member of Trickster, who supported ELO's 1978 "Out Of The Blue" stadium tour and were also ELO's label mates at Jet Records.

Hence, if Wheels Of Fire do come calling at a venue near you and you fancy having a listen to something different - you can do no worse than invest in a ticket or two and get your ears cleared out!