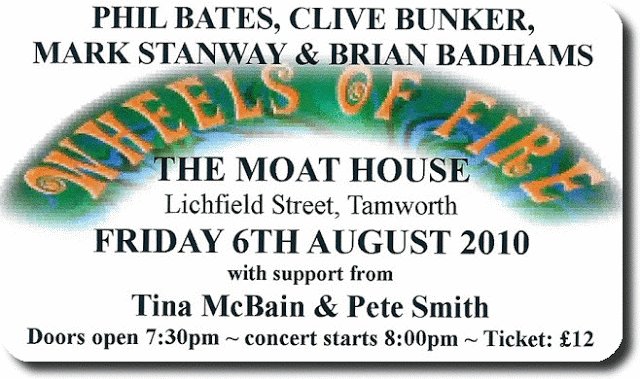 #103: Hello ... Hello ... my old friends ... It's great to see you once again! My good friend Christian "Jungle" Evans recently emailed Yours Truly KJS a brief but succinct review of Phil Bates' Wheels Of Fire gig in Whitmore Reans, Wolverhampton the weekend before last. The place was apparently heaving and the debut of Phil's new project was more than well received thus:

"It was as a privilege and an honour to be present at the Wheels Of Fire gig at the Cons Club last night. I can’t put into words how much I enjoyed it and how good these musicians are, particularly a certain Mr. Phil Bates. My [goodness] I know what a fantastic musician he his but last night really showcased his talents, brilliant vocals and just awesome guitar playing. Already looking forward to the gig at The Robin on August 5th. I do hope this band continue together and play many more gigs."

Wheels Of Fire will be returning to the Black Country on Thursday 5th August with a visit to The Robin 2 in Bilston near Wolverhampton. They will also be appearing the night after on Friday 6th August at The Moat House in Tamworth, Staffordshire [as per the above].