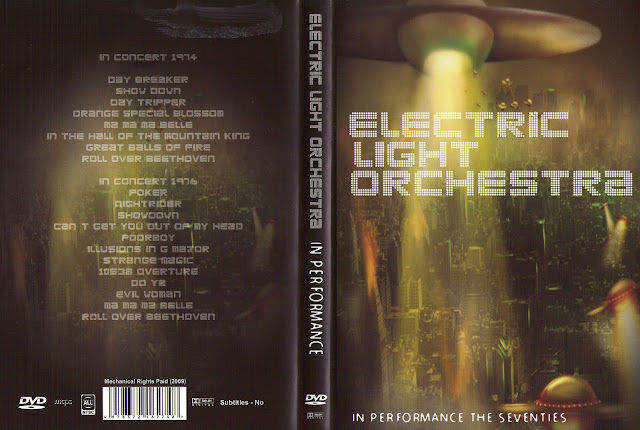 #78: Hello ... Hello ... my old friends ... It's great to see you once again! First things first: A belated Happy New Year to all ELOBF visitors and friends from Yours Truly KJS! I hope that 2010 will be a year of blessing, prosperity and a step towards the official release of "Beatles Forever"! It's been 44 days since my last article and in that time Yours Truly KJS has seen the legendary Roy Wood, survived Christmas and got my teeth into January! During those six weeks of apparent inactivity, I was (as usual) trying to get a copy of Kelly Groucutt's seminal 1982 UK single "Oh! Little Darling" (RCA245) and searching for any other ELO items of interest that I don't already own or know about when I found this interesting DVD on amazon.co.uk thus:
www.amazon.co.uk/Electric-Light-Orchestra-Performance/dp/B002Z1TGH0
Entitled "Electric Light Orchestra - In Performance", it was released in Europe in 2009 and is credited as being published by 'Mainstreet'. This DVD is not sophisticated and is basically two live performances copied from VHS to DVD and re-packaged. It includes ELO gigs from 1974 and 1976. The 1976 concert is none other than the entire "Fusion" VHS that was published circa 1990 in the UK by Pickwick (#PTR2152). The 1974 gig is not unlike the set list from "The Night The Light Went On (In Long Beach)" album. It was refreshing to watch both gigs despite the questionable hissing sound quality! It was even better to see Kelly Groucutt singing lead vocals on a couple of songs and totally enjoying it. There isn't a lot of ELO material kicking about out there from their 70's heyday at the "Time" of writing. Neither is there a lot from the 1980's. Hence this unofficial release might be an attractive capture for ELO completists out there - at least until an established label picks it up and gives it the appropriate treatment via an official issue ...
Until next "Time" in the ELO (and related) Universe ... KJS ... 11-Jan-2010
Posted by Keith J Sinclair at 18:01