The Name Game: The Orchestra 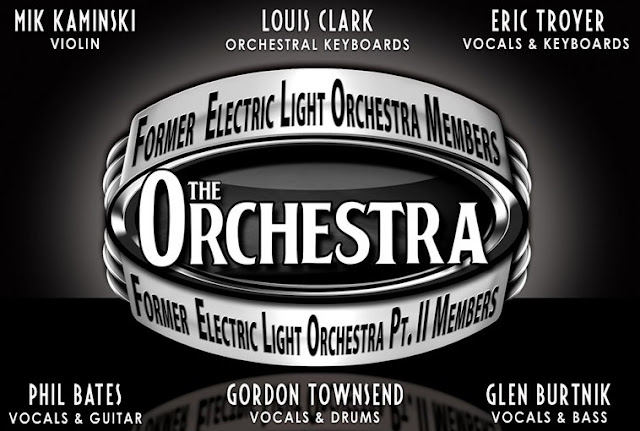 #72: Hello ... Hello ... my old friends ... It's great to see you once again! Yours Truly KJS was chatting with my gig buddy Christian Evans recently about not a few items of ELO interest. The first was the fact that we will have ELO tribute bands The ELO Experience (The Robin 2, Bilston on Friday 20th November) and The Electric Live Orchestra (The River Rooms, Stourbridge on Saturday 21st November) appearing here in the West Midlands later this month.
But more importantly, we were discussing the bizarre attendances during the latest tour by The Orchestra (former members of ELO & ELO Part II). Some venues were packed and others not. It appears that the name The Orchestra is not as promotable and marketable as ELO, ELO Part II or even OrKestra. There is massive ignorance out there in the general public; within the music industry and even within the venues themselves as to who The Orchestra really are. Some think that they ARE an orchestra or some evidently view then as just another ELO tribute act (and there are a few of those around), hence the apathy in the promotion of gigs that they themselves are hosting.
One wonders whether it's time for a re-branding of The Orchestra to a name that will get the attention of concert promoters and concert goers alike without being sued by Jeff who seemingly has no issue (so it seems) with ELO tribute acts doing the rounds and utilizing the ELO brand or versions thereof? I can think of few alternative names but can visitors to ELO Beatles Forever (ELOBF) come up with any suggestions too? Maybe we could have a bit of a poll? One thing is for sure: Jeff Lynne and Bev Bevan have stitched up all the combinations between them of E, L and O legally. Hence the question: Is it time for a change?
Until next "Time" in the ELO (and related) Universe ... KJS ... 05-Nov-2009
Posted by Keith J Sinclair at 23:02