Under London Skies & Beyond

#70: Hello ... Hello ... my old friends ... It's great to see you once again! We are now back from our tour of southern England this last week. The Sinclair clan have travelled down to Amesbury in Wiltshire in order to visit Stonehenge and Salisbury before going onto Bournemouth and Verwood in Hampshire. Following on from that, we've also spent the last three days in downtown London with some good friends in Wembley.

Rebekah and James have been to Wembley stadium, the Houses of Parliament, the Natural History Museum, the London Eye, Trafalgar Square and Covent Garden. And I literally brushed shoulders with Kevin Rowland of Dexy's Midnight Runners fame (another Wolves FC fan I might add!) when I was down in the tube station, but not at midnight! All the "Time", we've had the pleasure of the sublime music of the Electric Light Orchestra (ELO) to keep us company.

We've been blessed with travelling mercies, great fellowship and fantastic weather. The only downside is that I'm now nearly 42! If I wasn't feeling past my sell-by date before, I'm feeling it now! I've a plethora of pieces to write for ELO Beatles Forever (ELOBF), so please be patient with Yours Truly KJS as we go into November!
Until next "Time" in the ELO (and related) Universe ... KJS ... 30-Oct-2009
Posted by Keith J Sinclair at 20:11 No comments:

#69: Hello ... Hello ... my old friends ... It's great to see you once again! A number of folks have asked me about my thoughts on the recent gig by The Orchestra [former members of ELO & ELO Part II] at The Robin 2, the new 2CD compilation "Anthology" and the current UK tour. Today I'm bearing my soul regarding the current UK tour.
Yours Truly KJS believes that there is a kind of snobbery abounding in ELO circles regarding ELO Part II and The Orchestra. An example of this is the abandonment of said bands by Face The Music to effectively be a Sony BMG news outlet when in the 1990's it did a marvellous job in supporting the ELO Part II bandwagon (and the work of related artistes).
Let's make one thing clear. Right now you are, at the time of writing, unlikely to ever see a Jeff Lynne-led ELO vehicle (a la "Zoom") perform ELO's music live - especially in the UK and Europe. There are also long odds on (a) any new Jeff Lynne album breaching the Top 30 album charts or (b) a tour promoting a new Jeff Lynne album or (c) any substantial rendition of the ELO back catalogue. My point is that despite there being one or three decent ELO tribute bands about, the most likely chance of getting to see the music of ELO performed live in a professional and genuine manner is at a gig by The Orchestra. They DO sound good and they DO sound like the real deal.
If it weren't for either ELO Part II or The Orchestra, I doubt that we would have retained anything like the interest and momentum that ELO still have (including all those remastered packages and rolling compilations) a full 23 years after ELO's last studio album. Bev Bevan, Kelly Groucutt, Mik Kaminski, Louis Clark, Eric Troyer, Phil Bates, Pete Haycock, Neil Lockwood, Gordon Townsend, Parthenon Huxley and Glen Burtnik - in and of themselves have kept the light shining in their world traversing tours. They are either under-reported in the press or misreported generally as ELO. But they keep doing it with the light on.
All we have seen from Jeff Lynne in the meantime is "Zoom", a solo album in 2001 in all but name and perhaps better titled "Armchair Theatre Part II". Yes, Jeff owns the name and wrote 99% of the original music but that means, whether you or he likes it or not, that any Orchestra gig is really a tribute to his musical prowess and talent anyway. I've read and heard a few negative statements about the post-ELO bands. But bearing in mind that there is more of a chance that Elvis Presley and Michael Jackson will appear together in Las Vegas next week with Lord Lucan in a new musical - than us ever seeing ELO (as we knew it up to 1986) c/w Jeff Lynne again, The Orchestra are doing us all a service and, if we are really truly ELO fans, then we should support them. Period.
There are, however, other reasons for the relatively low crowds on the current tour. There is nothing wrong with the band, their performances or set list. The problems are (a) the abject apathy of ELO fans, (b) the choice of venues, (c) the number of venues, (d) the extent of promotion, (e) the effects of the (so called) 'credit crunch', (f) a second UK tour in the same calendar year and (g) the tragic loss of Kelly Groucutt and the perception of the band in his wake. In other words there are a lot of factors. I fear that this could be the final tour. I hope I'm wrong. It's time for folks to get behind this band and for the band themselves to celebrate their own songwriting legacy too.
On a personal note, I can tell you that Yours Truly KJS wouldn't have continued with my current ELO enthusiasm for the last twenty plus years if it weren't for ELO Part Two. And if Christian Evans hadn't have been wearing an ELO Part II tour sweatshirt from the 1991 MSO tour in a certain pub in Wolverhampton back in 1992, we would not have met and become such good gig buddies. I would not be the person I am now with the acquaintances that I've met with like minded musical interests. Life turns on such events. Nearly every person that knows me (from school days to nowadays) still say: "I thought of you" either when they hear an ELO song on the radio or TV.
Yes, I am an ELOnorak. We all have such a lot to be thankful for. The only way that I can express that gratitude is to support The Orchestra via ELO Beatles Forever (ELOBF), by word of mouth, when/if they are on tour or if/when they release another album. 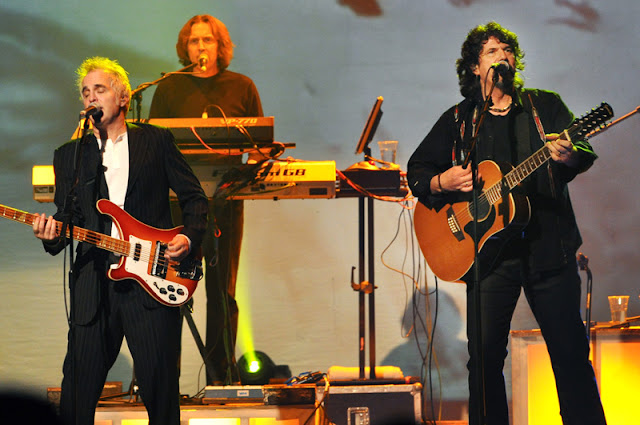 #68: Hello ... Hello ... my old friends ... It's great to see you once again! The recent gig by The Orchestra (former members of ELO & ELO Part II) at The Robin 2 was truly excellent, so much so that there is a very great possibility that Yours Truly KJS will be "Goin' Down The Road" to see them again at the Manchester Apollo on Wednesday 4th November too. 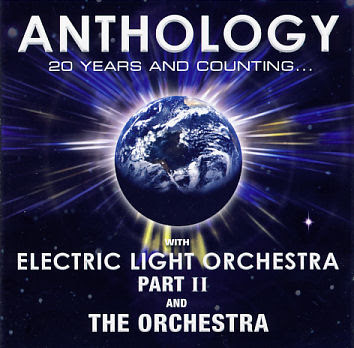 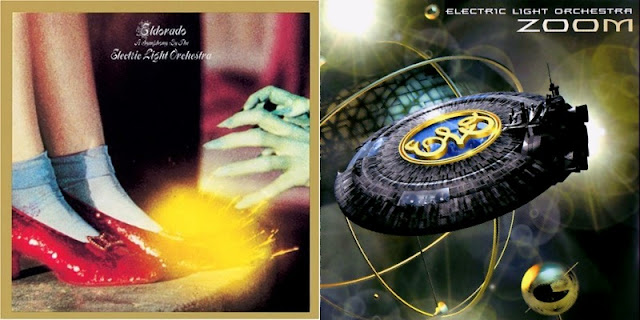 #67: Hello ... Hello ... my old friends ... It's great to see you once again! Only six days now to the big gig at The Robin 2 in Bilston on Tuesday 13th October when The Orchestra (former members of ELO & ELO Part II) return to their Midlands musical roots! Today I took a rare day off work and whilst meandering about in downtown Wolverhampton, Yours Truly KJS suddenly heard the familiar (but rarely played) tones of the ELO album track "Poorboy (The Greenwood)" blasting out over the tannoy. Ten minutes later it was "Mr. Blue Sky". Nice to know somebody out there who works the tannoy atn the Mander Centre has taste!
It reminded me of something that I meant to write last week. I listened to both the "Eldorado" and "Zoom" ELO albums in the car whilst driving to and from work and I've come to the conclusion that there really is no comparison between these two records. One is a classic concept album from 1974 brilliantly conceived by Jeff Lynne and performed by one of the two classic ELO line-ups and the other, although still a good offering, is essentially a Jeff Lynne solo album from 2001 or, as I've described it to friends on not a few occasions, is it "Armchair Theatre Part II"? I do hope that I haven't started another controversy with that statement ...

#66: Hello ... Hello ... my old friends ... It's great to see you once again! Here is some rare footage for you to marvel at from 1990 featuring, in part, Jeff Lynne and Roy Wood on stage together during Mike Sheridan's 50th birthday celebrations:

A DVD can be purchased featuring the above celebrations via this link thus: 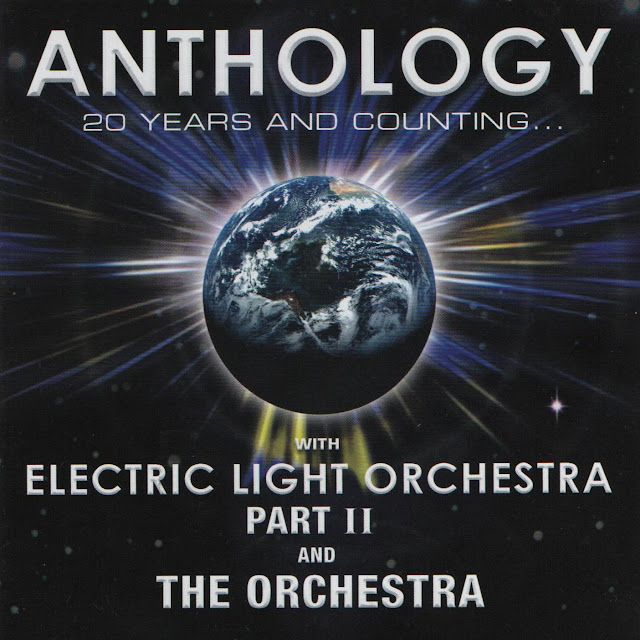 #65: Hello ... Hello ... my old friends ... It's great to see you once again! On sale during the upcoming Autumn "Greatest Hits" tour by The Orchestra (former members of ELO & ELO Part II) will be a long overdue 2CD compilation featuring ELO Part II and The Orchestra.

It's not clear as to whether the album will be available just at gigs and/or via the internet but it does look like a decent overview of ELO's post-Jeff Lynne career. There are tracks from all four ELO Part II albums as well as The Orchestra's "No Rewind" plus other more recent live recordings and Kelly Groucutt's last studio recordings with The Orchestra for a Russian TV show. 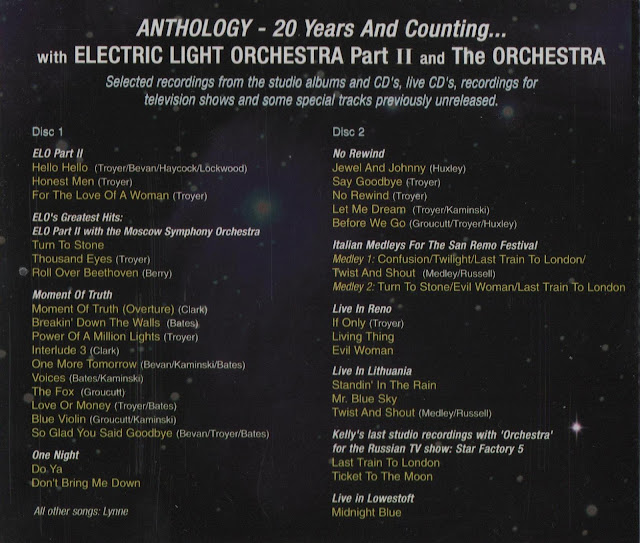 And there's another good reason to go see The Orchestra live in '09: a new set list! Yours Truly KJS also wonders whether we will ever hear the likes of "Honest Men" live again ...