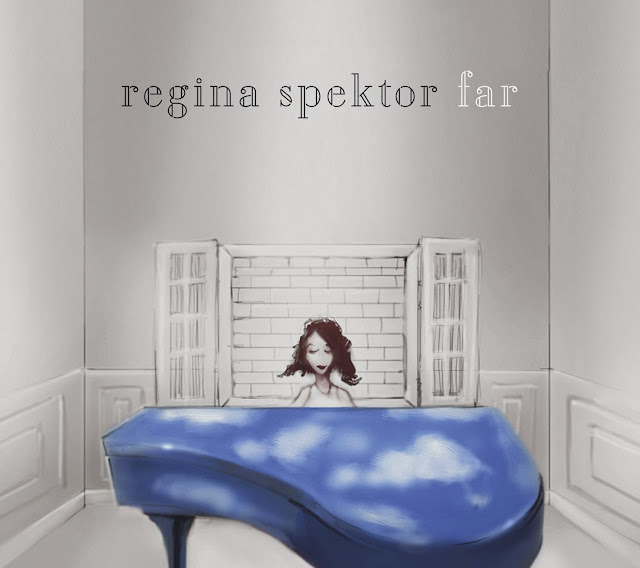 #35: Hello ... Hello ... my old friends ... It's great to see you once again! Yours Truly KJS is pretty sure that regular visitors to ELO Beatles Forever [ELOBF] will be aware by now that the new Regina Spektor album "Far" will be released on Monday 22nd June via Sire  Records.

"Far" will feature four [4] songs produced by Jeff Lynne - plus an extra bonus track if you go for the Special Digipak Edition. The five [5] tracks found on "Far" of special interest to fans of ELO & Jeff Lynne will be: "Blue Lips", "Folding Chair", "Genius Next Door", "Wallet" and "The Sword & The Pen" [Bonus]
Regina Spektor also talked about "Far" and working with Jeff Lynne during this recent interview for Rolling Stone Magazine thus:
RS: It’s amazing that you got Jeff Lynne. Your manager said it was the last Tom Petty record that got you hooked on Jeff Lynne?
Regina: Yeah, I love Highway Companion. I just remembered his name from the CD jacket. “Oh, that guy’s got to be really good, that sounds awesome.” Everyone’s like, “Yeah, he’s also done some other things…” He’s really amazing, really kind, and it was awesome working with him. I loved the whole atmosphere that he made because it was at his home, and he’s just so talented, it’s crazy. Everything in that house is sort of magical, because he is who he is. So I would pick up an instrument and he’d say, “Oh yeah, George Harrison gave that to me. Step away from the banjo, lady.” But it’s really cool, and he has his own way of seeing sounds, I guess, or hearing things. He’s such an amazing writer and musician as well as a producer. I think he came to production just because he wanted his music to sound a certain way. So in that way, it’s very unique, because he’s a musician first.
RS: I’m sure there’s random people coming through to visit him?
Regina: Well, we were kind of serious in our work, so we did have this really amazing friend of his help me a lot on the record, whose name is Mark Mann. He’s a film score composer, and he does a lot of things with Danny Elfman and stuff like that, but he had these really cool orchestra samples and all kinds of really amazing things to play with, and it was really fun listening to him and watching him orchestrate. I’ve been so hands-on with things that it’s really fun for me to just let go a little bit, and kind of allow people to be who they are and show me things as opposed to being like, “It’s my music!” I think that was cool. It’s exciting, because he had a box arrive, and it would be a case of beer from Paul McCartney, who makes his own beer, or something. Fun things like that. For me, it’s the art that’s the most fun. People are nice, but watching something be made, that’s really cool.