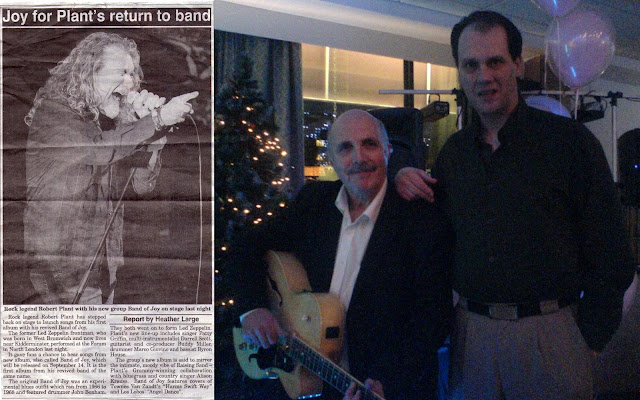 #33: Hello ... Hello ... my old friends ... It's great to see you once again! Yours Truly KJS was talking to my wife's uncle earlier today. He is a wonderful man of God as well as being a fantastic guitarist and musician. I've had the pleasure of playing percussion with him on the odd occasion too.
He told me that in the early 60's, he used to play and practice with a certain Robert Plant in his mothers front room here in sunny Wolverhampton. We got to talking also about my love of the music of ELO and he mentioned that he had been having a listen to some of their stuff recently. He also used to own a music shop in Birmingham and sold guitar strings to a certain Jeff Lynne back the day! But what got my attention is that he said to me today (for the first time - I've known him for 13 years) that he played in Band of Joy as support to a certain well known Birmingham band entitled The Move, the predecessor, of course, to ELO in those sixties days. And I've no reason to doubt him. He still remembers the trashed televisions and media stunts that The Move were sometimes famed for. Even though Wikipedia doesn't mention him in their Band Of Joy line-ups; there does appear to be a gap between the 1966 and 1968 (various) roll calls. In any case, it's yet another one of musical ELO links that seem to follow me around! His name is John Elson.
Until next "Time" in the ELO (and related) Universe ... KJS ... 01-June-2009
Posted by Keith J Sinclair at 21:00